Aside from a tornado hitting Duston on 14th, unsettled weather conditions – courtesy of a couple of low pressure systems crossing the UK – brought little in the way of scarcities to the county, although passerine migration was very much in evidence throughout the week.

The two Ruddy Shelducks remained at Pitsford Res until at least 16th while Pintail numbers doubled this week with one at Ravensthorpe Res from 12th to 16th and last week’s drake remaining at Wicksteed Park Lake on 15th. Two of last week’s Garganeys remained – the Pitsford Res juvenile until 13th and the Hollowell individual until 16th while five eclipse drake Red-crested Pochards at Pitsford Res on 13th and two at Stanford Res between 13th and 16th served to complete the week’s wildfowl line-up. After three weeks of relative prominence there was just one Great White Egret – at Pitsford Res on 13th, the day after the second of the autumn’s Black-necked Grebes was found at Summer Leys LNR. It did not stay.

Raptors provided slim pickings with just one juvenile Marsh Harrier at Blueberry Farm, Maidwell on 12th or 13th and, intriguingly, an unidentified ‘ringtail’ harrier at the same locality on 17th. This site also produced a Peregrine on 12th or 13th and further singles were seen at Pitsford Res on 13th, Higham Ferrers on 16th-17th, between Moulton and Holcot on 17th and in Northampton on 17th-18th.

On 13th a few more Black Terns appeared, including eight at Pitsford Res and two at Hollowell Res, the latter birds remaining to be joined by a third on 16th and a juvenile Little Gull paid a brief visit to Stanwick GP on 15th. Numbers of  Yellow-legged Gulls were down compared to last week and included the regular adult at Hollowell Res, two adults and a juvenile at Pitsford Res on 12th with an adult there on 13th and 17th and two adults at Stanwick GP on the latter date.

Common Redstarts were still very much in evidence with up to five in a hedgerow between Pitsford Res and Walgrave all week, a first-winter trapped and ringed at Stanford Res on 13th, singles at Clifford Hill GP and Sulgrave on 14th, two at Harrington AF on 16th with five there the next day and two at Blueberry Farm on 17th-18th. 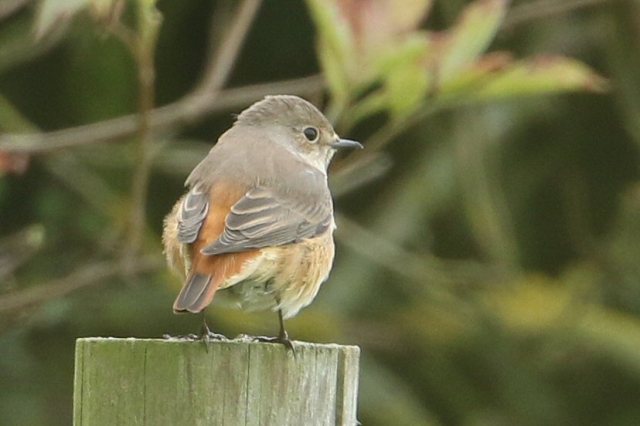 The latter site continued to hold up to six Whinchats throughout the week, Harrington AF was close behind with at least four, while Clifford Hill GP produced at least three between 14th and 18th, the Pitsford Res/Walgrave hedge held two on 17th and singles were found at Hollowell Res on 12th, Sywell CP on 17th and Summer Leys the following day. The autumn’s first Stonechats appeared this week with two at Blueberry Farm on 17th, two at Stortons GP on 18th and one at Summer Leys on the same date, while single Northern Wheatears were at Hollowell Res on 12th-14th, Harrington AF on 16th, Pitsford Res, Blueberry Farm and Walgrave on 17th and two Tree Pipits overflew Harrington AF on 16th followed by another the following day.