The early part of the week saw a northerly airstream, which depressed temperatures somewhat, resulting in overnight frosts for the first two days. This subsequently gave way to a rain-laden Atlantic low moving east across the country on 9th, delivering persistent heavy rain throughout the day, which ultimately resulted in significant flooding along the entire River Nene Valley. Despite parts of it resembling scenes from the Ouse Washes, the birds were unfortunately not there to match. Clifford Hill Gravel Pits lived up to its more recent moniker of Northampton Washlands, with the main barrage lake there disappearing entirely under water, while Hardwater Crossing along the access road to Summer Leys main car park was closed on 11th.

Showing no signs of returning to wherever it originated, the Ruddy Shelduck remained at Pitsford Res until at least 8th, as did the two Smew at Stanwick GP, while the female Scaup at Summer Leys LNR stuck it out for the duration. 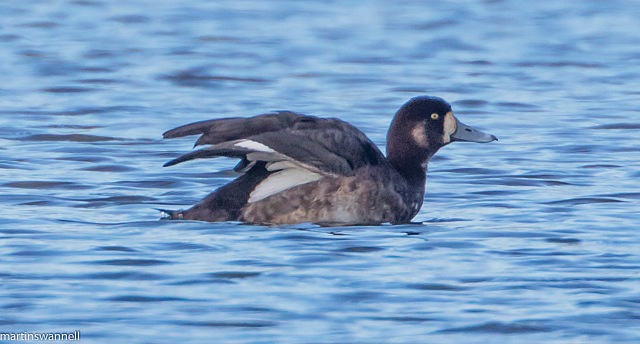 At Stanwick the Bittern was seen only in flight again on 5th and 7th, while the Summer Leys individual – after posing nicely for photographers last week – put in a single brief appearance again on 6th. Two Great White Egrets were at the latter locality on 5th with just one remaining on 6th and 11th and one was still at Thrapston GP until 6th – the low number of records indicating that our small, local wintering population is now on the move.

There no raptors of note other than Peregrines, singles of which were at Northampton on 5th, 7th and 8th, Broughton on 6th and Summer Leys on 11th but the appearance of some ‘new’ waders provided further evidence of spring migration. Up to five Golden Plovers were at Harrington AF on 5th and 9th with fifty counted there on 10th, while four Ringed Plovers flew north over Stanwick GP on 9th. Two Curlews flew south over Walgrave on 10th, two were on floodwater in the River Tove Valley near Grafton Regis the following day and two Dunlin visited the flooded Clifford Hill GP also on 10th.

Pitsford’s Green Sandpiper, on the pool below the dam, remained until at least 8th and, on 5th, five Redshanks were at Stanwick GP and two at Summer Leys, eight were at Stanwick again on 11th, with four Common Snipe at Upton on 9th representing the sole record of this species during the period.

Right on cue more Kittiwakes arrived in what is indisputably the peak month for this species locally. Five – all adults – included singles at Stanwick GP on 6th and in the gull roost at Pitsford Res on 8th followed by three again at the latter site the following evening. The same gull roost contained a first-winter Mediterranean Gull on 8th and a near-adult Caspian Gull was there again on 5th, the same date a first-winter visited Stanwick GP, followed by two third-winters on 7th-8th. Another Mediterranean Gull – an adult – was in the Boddington Res gull roost on 11th. 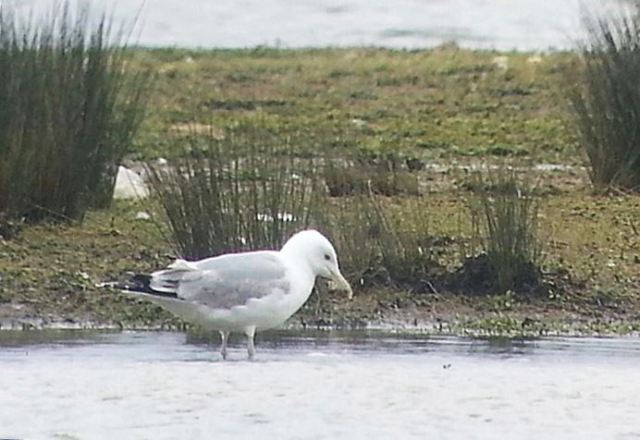 On 5th, a first-winter Yellow-legged Gull was at Pitsford Res and a second-winter visited Stanwick GP, while some interesting news relating to the red-ringed (G1NT) adult Glaucous Gull which had been visiting Stanwick until 2nd was received this week: it was seen at Sandbach Flashes in Cheshire on 8th and 10th, clearly on its way back up north.

And staying with Stanwick … the Firecrest was still in the willow scrub by the A45 Lay-by Pit hide on 8th, up to three Central European Blackcaps were visiting a garden in Barton Seagrave until 6th, a female was still in a Duston (Northampton) garden all week and a Siberian Chiffchaff was found by the River Nene at Earls Barton GP on 5th, although it appeared to have moved on by the next day.

Single Stonechats were at Summer Leys between 5th and 7th and at Fawsley Park on 6th, while two were at Blueberry Farm (Maidwell) and four near Grendon on 7th.

Brambling numbers included just one in a Hanging Houghton garden on 5th, eight still in Warmington and one or two in gardens in Oundle throughout the week while, after an apparent ten-day absence, the East Hunsbury (Northampton) Mealy Redpoll reappeared on garden feeders on 5th and again on 11th.