Temperatures below the seasonal norm, low pressure systems scudding across the Atlantic and winds from every direction, except the east, combined with sometimes heavy showers to produce, well, pretty much nothing new this week.

Pitsford’s two Ruddy Shelducks remained settled north of the causeway all week but no other ducks of note were reported during the period. Last week’s excitement caused by the discovery of the adult Night Heron at Ditchford GP was rapidly curtailed as the bird disappeared on the evening of 25th immediately after giving its best performance during its four-day stay. Vigils tense with anticipation on the subsequent two evenings drew a blank, although it would not be unreasonable to expect it still to be somewhere in the area. Just one Osprey was seen this week, in flight near Pitsford Res on 29th.

Following on from the four Avocets at Clifford Hill GP on 19th, a further individual was an early morning find on the scrape at Summer Leys LNR on 26th but it quickly moved east, being seen for just ten minutes at Ditchford GP’s Irthlingborough Lakes & Meadows reserve before again departing east toward Stanwick GP. There were few Little Ringed Plovers in evidence in comparison to previous weeks with singles at Summer Leys on 25th and 28th and Pitsford Res on 27th and two at Stanwick GP on 28th, where there were also two Ringed Plovers on the same date, followed by three there the next day. A Sanderling at Hollowell Res on 25th was one of a small number of inland records around this date, while a trickle of Dunlins included singles at Stanwick GP on 28th, 29th and 31st and two at Summer Leys on 28th.  Two Curlews visited Stanwick on 31st along with the only Green Sandpiper of the week, while two Common Sandpipers were there on 28th-29th with up to two at Pitsford Res between 25th and 27th and one at Summer Leys on 26th. The only Redshanks were two at Earls Barton GP on 25th-26th.

Apart from single adult Yellow-legged Gulls at Ditchford GP on 26th and Thrapston GP on 27th, Stanwick GP continued to hold the lion’s share – including the summer’s first juveniles – with double-figure counts peaking at seventy-seven on 30th. The same site also continued to host two Caspian Gulls – an adult and a third-summer – all week. Some of the first autumn migrant passerines were in evidence during the period with Blueberry Farm holding four Whinchats on 25th and nearby Harrington AF producing a Northern Wheatear on 31st. It’s almost August …

Ditchford’s recently discovered adult Night Heron – Northamptonshire’s tenth – is continuing to draw the local crowds with around 30 birders enjoying the best views yet of this bird last night. It’s still not the easiest of Night Herons to see as Jim Dunkley’s image below demonstrates.

Last night it was very vocal, calling for some 10 minutes from willows by the Bailey bridge before flying off toward Wilson’s Pit at around 22.00. An excellent sound recording made by Adrian Borley is here. For anyone still to make the trip there, it’s around 15 minutes’ walk along the Nene Way footpath from Ditchford Lane. Park near the entrance to Broadholme Sewage Works SP930684 (do not obstruct the entrance as it is in constant use by HGVs), walk east for c.1200 m to the Bailey bridge SP944686 and view from this area. It normally appears any time between 20.15 and 21.45.

Leave it a month and see what happens. In a normally quiet period of the year – at least in Northants – the last four weeks have produced some cracking birds to keep locals busy and, more latterly, very happy. Set against a backcloth of good numbers of passage waders came a number of scarcities and rarities more typical of spring or autumn proper than summer. And as for the weather, well, largely warm and dry until the forecasted twelve hours’ heavy rain set in on 24th …

Aside from one at Stortons GP on 27th, two Ruddy Shelducks were back at Pitsford Res the following day, vanishing again until 11th and then remaining there until at least 22nd. More intriguingly, three were discovered at Stanwick GP on 14th, where they remained for only a matter of early morning minutes before moving on. One had an inconspicuous pink ring on its left leg and speculation has it that this trio first appeared at Cley, Norfolk on 12th before moving to Drayton Basset Pits in Staffordshire later on 14th after a quick Stanwick stopover.

The only other scarce dabbler was a Garganey – also at Stanwick GP – on 19th and diving ducks included two drake Red-crested Pochards at Summer Leys on 28th, three drakes at Pitsford Res on 4th with one there from 7th to 18th, two at Stanwick GP on 11th and a drake at Hollowell Res on 20th, while a drake Common Scoter was a nice summer discovery at Daventry CP on 15th.

A Bittern at Stanwick GP on 19th was most unseasonal – perhaps reflecting the increase in numbers of Britain’s breeding population in recent years but even more unusual was the discovery of an adult Night Heron at Ditchford GP on 22nd. Disturbed from riverside vegetation by a passing fisherman, who was clearly well up on his bird ID (and had the good sense to report it locally), the news filtered down to Steve Fisher who, on his second search attempt of the day, located it in the same area during the evening. After some skulking in waterside willows it broke cover just as night fell and headed off presumably to feed somewhere locally. 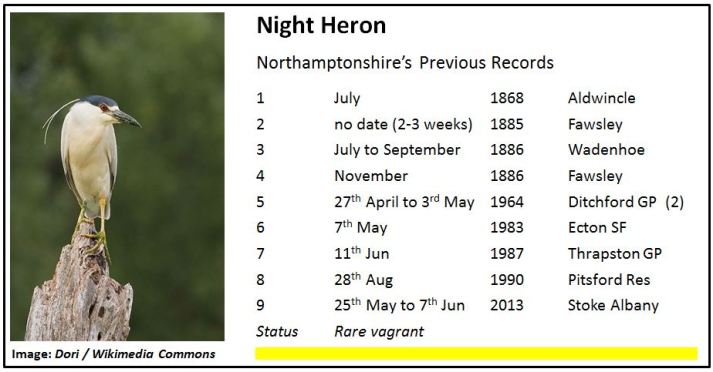 It was back again in the same area the following evening, the end of which saw it flying east down the Nene, and was again present opposite the nearby sewage outfall on 24th. How long it has been there and will remain is anyone’s guess but it’s only the tenth record for Northants and the second in the last twenty-five years. Tame by comparison, single Great White Egrets were seen at Thrapston GP on 1st and 4th, at Summer Leys also on 4th and flying west over Stanwick GP on 20th.

Following last month’s Honey Buzzard another was seen over Daventry CP on 10th and yet another two days later, on 12th, over Corby STW, while single Marsh Harriers flew over Summer Leys on 21st and Stanwick GP on 23rd. Visiting Ospreys were observed flying over, or fishing, at Hollowell Res, Northampton, Pitsford Res and Welford/Sulby Res while Peregrines were seen at three sites with proven breeding at one of these.

Running deep into July it’s inevitable there’ll be at least a few waders coming back through but the county managed to attract more than its expected quota. Four Avocets at Clifford Hill GP on 19th constituted a bit of a mid-summer bonus, while more normal fare included both summering and passage Little Ringed Plovers at seven localities, with a maximum of ten at Hollowell Res on 15th. By contrast, however, there were just two reports of Ringed Plovers with one at Stanwick GP on 14th and two at Hollowell Res the following day. Following heavy rain, Stanwick GP produced three Little Stints on 19th, while the same site, along with Hollowell Res and Pitsford Res, held between one and five Dunlins between 15th and 22nd. Singles of Ruff visited Pitsford Res on 8th and Summer Leys on 15th and Common Snipe Hollowell Res on 15th and Summer Leys on 17th. A pronounced passage of Black-tailed Godwits occurred between 4th and 21st, with birds occurring at Pitsford Res, Clifford Hill GP, Summer Leys and Stanwick GP with the latter site producing 57 on 8th, although another double-figure count of ten was made at Pitsford Res on 19th.

A species more scarce in the county than it used to be, a Little Tern flew west at Summer Leys on 23rd. Eclipsing this, however, was a fine summer-plumaged White-winged Black Tern at Stanwick GP early in the morning of 19th. Unfortunately it did not stay and it was relocated later in the day at Rutland Water, Leicestershire. This is the sixteenth record for the county and the first since 2003, when one spent nine days at Earls Barton GP. There were no reports of the record long-staying second-summer Mediterranean Gull at Summer Leys beyond 29th and single adults were found Daventry on 3rd and Stanwick GP on 18th and 23rd, while the county’s earliest ever juvenile appeared at the latter locality on 10th and another visited Hollowell Res on 16th. The now annual summer build-up of Yellow-legged Gulls at Stanwick GP commenced early in July with approximately thirty there on 7th, rising to an impressive minimum of ninety-two on 21st.

Exotic stuff rarely finds its way to Northants but barely had a belated report of a Hoopoe at Grendon on 16th June reached the ears of local birders before news broke of something even more colourful – and a whole lot rarer – in the shape of a European Bee-eater heard calling over Hanging Houghton on 19th. Constituting the fourth record for the county, this was another species seriously overdue for a repeat visit following three previous records in 1995, 1997 and 2003, all of which were in May.

A female Common Redstart trapped at Stanford Res on 5th had an active brood patch suggesting it was a local breeder, while a late summer movement of Crossbills included nine over Hanging Houghton on 1st, eight over Pitsford Res on 13th, fourteen over Scaldwell on 16th, singles over Ravensthorpe Res on 17th and Stanwick GP on 23rd and approximately ten at Lady Wood on the latter date.