This week’s summary of summer visitors arriving in the county.

Five more spring migrants have arrived during the past seven days. This week’s quintet includes two species which, arguably, are not 100% summer visitors, as both Whimbrel and Spotted Redshank winter regularly in the UK. However, unlike Chiffchaff and Blackcap, for example, their wintering populations are tiny by comparison, with totals of perhaps only 20-30 Whimbrels and 90-100 Spotted Redshanks found principally, although not exclusively, in south coast locations (BTO, RSPB.1, RSPB.2). The arrival dates for these two species are unremarkable, the date for Whimbrel being fairly typical (19th April 2018, 17th April 2019), while Spotted Redshanks are rarer in spring than autumn and often they don’t appear before July.

Arctic Tern this year arrived nine days later than in both 2018 and 2019 and while not being unduly late, Black Terns arrived eleven days later than the earliest ever (7th April in 2019) and one day earlier than in 2018.

With still more to come, an expanded list of general migrant arrival and departure dates, including historical extremes, can be found in the annually published Northamptonshire Bird Report.

Six of the best – and another record-breaker in this week’s look at summer visitors arriving in the county.

Following last week’s review of this year’s summer visitor arrival dates so far, another six are now in, including the earliest-ever Lesser Whitethroat on 10th April. This species appears to have enjoyed a fairly consistent run of early arrival dates in recent years, with the previous earliest on 12th April in 1981, 2014, 2016 and 2017. Last year’s first was found on 17th April – a full week later than this year’s. 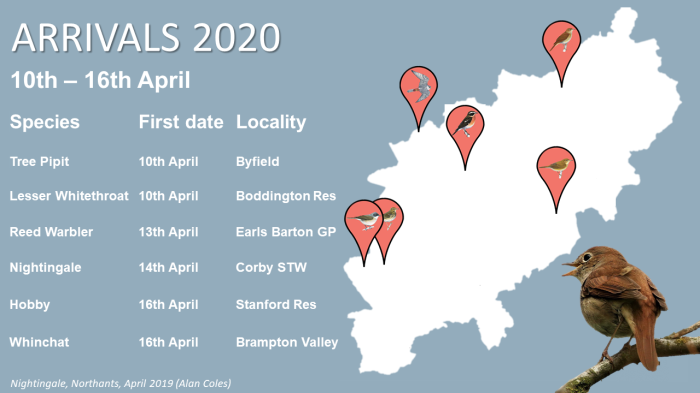 Coming close, in second place, is Whinchat on 16th April, which is only one day behind the previous earliest in 1984 and 2015. Beyond this, the Nightingale is four days earlier than last year’s, the Reed Warbler was found on the same date as last year’s first and the Hobby is six days earlier than the first one to be seen last year but probably more in line with the ‘average’ arrival date for this species.

This leaves Tree Pipit. It’s a difficult one to draw comparisons in arrival dates between this year and previous years because of the population decline it has undergone, especially in central and southern England, over the past twenty-five years. Red-listed in the UK as a species of critical concern, in our county it is now a scarce passage migrant. In 2012, for the first time ever, there were no spring records.

More to come. As always, an expanded list of general migrant arrival and departure dates, including historical extremes, is published annually in the Northamptonshire Bird Report.

A ‘new’ White-tailed Eagle travels the length of the county and this time … the eagle has landed.

Following last week’s overview of White-tailed Eagle occurrences in Northamptonshire, another individual, radio-tagged male ‘G393’ from the Isle of Wight reintroduction scheme, made a more prolonged visit to the county during 13th-14th April. During its short stay, it was seen by only one person and photographed.

This bird’s late March and early April wanderings have been documented here. It was one of the two birds that was in the North York Moors before moving south and covering 223 miles over two days. It then entered Northamptonshire north-west of Hellidon, late in the afternoon of 13th, before choosing a roosting site in a line of trees on farmland between Maidford and Little Preston. 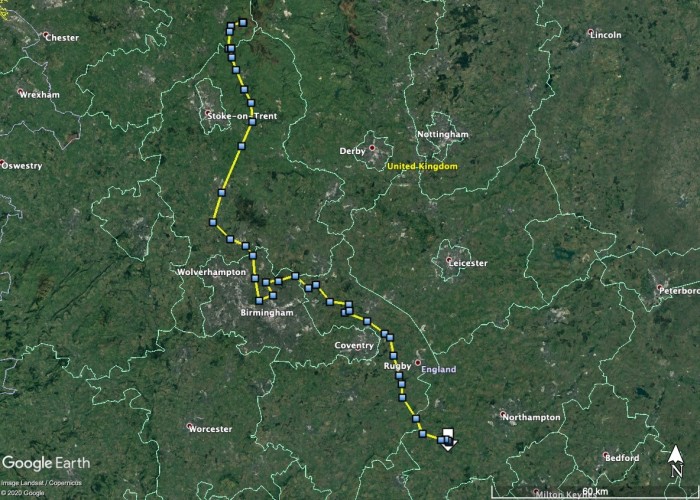 It left its roost site the following morning, drifting east through the county, dropping briefly into a field just south-east of Northampton at 12.15. Somewhat amazingly, it appeared to have passed over unnoticed until, continuing north-east, it was spotted at 13.00 by eagle-eyed Steve Fisher, who was watching the skies above the Nene Valley from his garden in Irthlingborough. Shocked and elated, Steve managed some quick-fire shots with his camera as it drifted over Irthlingborough Lakes & Meadows LNR before it carried on north-east along the valley. A just reward for persistent lockdown garden birding! 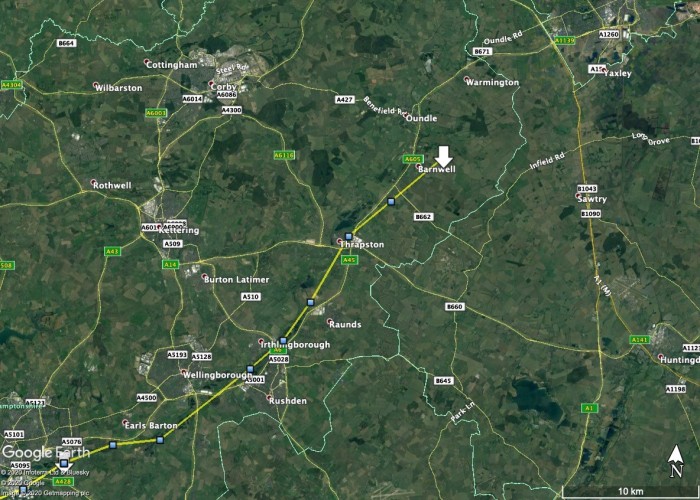 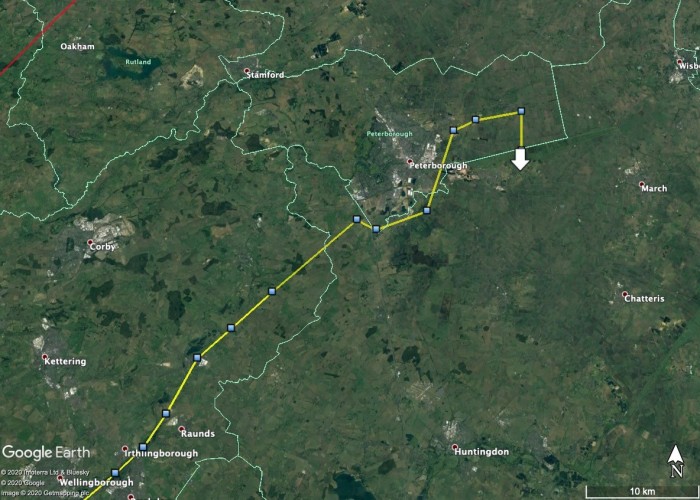 At 14.15 it passed Barnwell, having continued to follow the Nene Valley and after this, it left the county, heading into Cambridgeshire and the Nene Washes, south of Peterborough. It subsequently ended up in west Norfolk, where it remained during the evening. If a bird this large can fly almost the entire length of the county undetected, then what else are we missing!

I would like to thank Dr Tim Mackrill (@timmackrill) of the Roy Dennis Wildlife Foundation for providing updates, tracking data (and maps via RDWF/Forestry England) and Steve Fisher (@stanwicktramp) for additional information and images.

Did you know … Pete Campbell, Proprietor of Cherwell Ironwork Ltd and well-known ex-Northamptonshire birder, made the cages for the young eagles in Charwelton and helped babysit them on the Isle of Wight prior to their release.

An online interactive ‘Where to Watch Birds’ has just been launched, helping users to plan trips, discover new local birding sites and importantly, to add new localities to the map. Not one single site in Northamptonshire is currently featured, so it’s wide open for contributors to update.

The health crisis caused by the Coronavirus forces most of us to stay at home as much as possible but there is now the ability almost to bird online, exploring new areas and running through the localities featured on the new website www.birdingplaces.eu. The site is a virtual gateway to hundreds of birding areas across the UK and Europe and provides much of the information needed for some fine hours of birding.

You can also place your own favourite bird areas on the map simply by clicking on “Add a birdingplace” and following the instructions. It’s easy to do – especially with time on your hands when you have to stay at home in these times of lockdown and self-isolation.

www.Birdingplaces.eu  is made by, and for, birders and is non-commercial. It’s an easy-to-use platform that connects birders from all over Europe and when logged in, you can also leave tips and comments, check out the “Birdingplaces League” or use the “Find a Bird”-tool. It’s all free to use.

To celebrate the launch of Birdingplaces.eu there is now have a chance of winning a top model Leica binocular and telescope when you add birding spots to the website. See www.birdingplaces.eu/go-in-and-win for more information.

The first twenty are in! But how do this year’s arrival dates compare with those of previous years?

A review of how spring is progressing, in terms of the arrival of summer visitors, covers the five weeks up to 9th April. Two species, Blackcap and Chiffchaff, are excluded as both have significant wintering populations that cloud the arrival dates of those wintering outside of the UK.

This year, one species sets a new record for the earliest ever arrival date. The Garden Warbler at Boddington Reservoir on 7th beats the previous earliest, which was in 2010, by three days. This year’s Common Whitethroat and Willow Warbler are relatively early for the county, being only three days and seven days later than the earliest, in 1998 and 1997, respectively. No other species produced noteworthy arrival dates, especially when population dynamics are taken into consideration.

With another fifteen species to arrive over the next five weeks or so it will be interesting to see if they are on time, early, or late. An expanded list of general migrant arrival and departure dates, including historical extremes, is published annually in the Northamptonshire Bird Report.

Is White-tailed Eagle the ultimate local rarity? If not, then it must certainly be the most majestic. Few of today’s birders – possibly only four, in fact – have seen one in the county …

A spate of sightings across southern and eastern England during late March and early April relates in part to four wandering juveniles, ringed, radio-tagged and released on the Isle of Wight in the first stage of a new reintroduction program for this species. The recent movements of each of these individuals have been detailed by Roy Dennis here and one of these birds, ‘G318’, a female, was tracked as it entered Northamptonshire airspace, from the south, during the afternoon of 4th April. At approximately 14.00, it was logged east of Daventry, moving north at an altitude of 521 metres, before eventually roosting in a wood near Grimsby, Lincolnshire during the evening.

However, there have been other sightings of juveniles which are not attributable to any of the above four individuals and it is believed there could be as many as four or five continental birds wandering around the UK, including a metal-ringed bird which is thought to be from Sweden.

It’s been just under two weeks since one of these was seen at Kings Cliffe, in north-east Northants. It was initially thought to be a Golden Eagle, although the tail shape rules that species out and, set in the context of all the other recent sightings, White-tailed Eagle is clearly the species in the frame. Michael Bunting was the lucky observer.

The above bird was also reported as still being in the area on 31st March and may well have been the bird seen and photographed by Mark Hawkes as it moved south-east, mobbed by corvids, over Grafham Water and Perry, Cambridgeshire on the morning of 2nd April. Grafham is little more than 30 km south-east of Kings Cliffe … as the eagle flies.

Prior to this, there has been only one recent record in Northants – one in flight over Wansford on 23rd January 2005, which had toured north-east Norfolk from late December 2004 before spending several days around the Ouse Washes in Cambridgeshire in January. Richard Patient was the lucky observer on this occasion and his narrative, below, forms part of the accounts published on the Cambridge Bird Club website by several birders who were fortunate enough to connect with it.

And you have to go a long way back for the one prior to that – a site-faithful individual which spent successive winters at Blatherwycke Lake, from 1897-98 to 1901-02 and was last seen there on 16th January 1902.

According to BirdLife International (2020), the White-tailed Eagle population is increasing so, hopefully, we can expect more local records in the future.

For one lucky person at least, ‘lockdown’ birding has delivered! At home in Spratton, David Arden was fortunate in having a Black Redstart visit his garden this afternoon. His excellent photos depict a very worn and faded bird, which appears likely to be a first-year female, based on appearance and feather wear. It has renewed a tertial on its right wing, the outer whitish edge of which would ordinarily contribute to the white patch on the closed wing, much abraded in this bird.

A message from the BTO 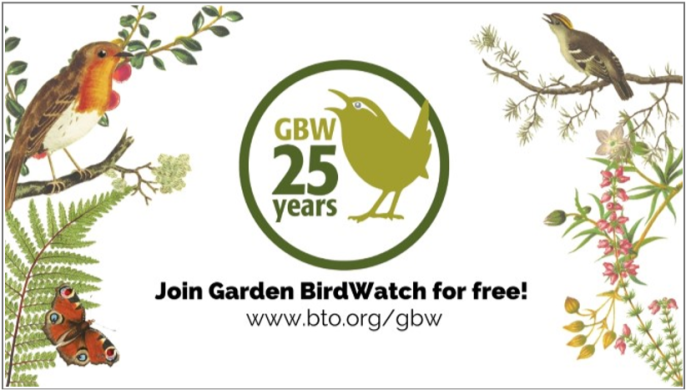 You can now join the BTO Garden Birdwatch Community for free

During the lockdown, many of us are looking to our gardens to enjoy nature and be outdoors, to learn, and to improve our well-being. BTO Garden BirdWatch offers a great opportunity to learn more about garden birds and other wildlife, and to contribute directly to BTO’s important scientific research on the value of gardens for wildlife.

By understanding more about how wildlife uses our gardens, we’ll be able to make our cities, towns, villages and individual gardens better for nature.

To take part you simply keep a list of the birds you see visiting your garden over the course of a week, then enter this into our online recording system. If you want, you can also record other garden wildlife, such as butterflies and mammals.

Your sightings will help us to understand how and why populations of garden birds and other wildlife are changing, and how we can all help them.

This free offer includes access to our online recording system, a regular Garden BirdWatch e-newsletter with information on recording and identifying garden wildlife, and access to the BTO’s team of wildlife experts to answer your questions on garden wildlife.