It’s been a record year for Glaucous Gulls at Ditchford already and we’re only at the end of January. With the discovery there in December of a juvenile, followed by a second-winter in early January, there has been a total of five Glaucous and two Iceland Gulls at this site, all birds commuting between the gravel pits and nearby Sidegate Landfill. The records so far can be summarised as follows:

I was lucky enough to find the fourth-winter Glaucous Gull there on 15th January and to catch up with both the second-winters but the juvenile and the adult have (so far) managed to elude me. The most recently discovered second-winter was on show yesterday, distantly in the field opposite the entrance to Sidegate Landfill (see below).

It’s a different individual to the original one which is still present, being ‘whiter’, i.e. less brown in the plumage, and with a different bill pattern – the pale tip being a little more prominent and the black subterminal band being a different shape.

Hopefully more white-winged gulls will appear here before the winter is out. March is a recognised passage month for Iceland Gull and there’s always the outside chance of Ring-billed Gull – long overdue at this site, which hosted the first County record of this species in March 1984.

That’s the question being asked by a number of birders after at least a couple of locals have voiced their opinion to the effect that the Ditchford Gravel Pits individual, currently present on Wilson’s Pit, is not a 100% pure Scaup. It has been there since its discovery on 16th January and I caught up with it last weekend (22nd) before going to see it again this morning.

The anomalies being cited are a) ‘small’ size, b) lack of prominent pale ear-covert patch, c) black on the bill tip not restricted to the nail and d) a pale subterminal band to the bill.

Have a look at the best of a bad bunch of digiscoped photos, below. With regard to the size it’s a little larger than a Tufted Duck, with a larger head and slightly bulkier body but it’s fractionally smaller than most Pochard present. The pale ear-covert patch, which develops in late winter and is variable, is present but not prominent (see first photo).

Let’s see if it becomes more obvious with time (assuming the bird stays, of course!). With regard to the pale subterminal bill band, it’s actually quite narrow, diffuse and slightly lighter than the overall bill colour and it’s not too uncommon for Scaup to show this contrast against the black nail. The latter colour also extends on to the bill tip, fanning out either side of the nail, but it is restricted to a small area (see second photo).

Presence of this feature – when more extensive – is often quoted as an indication of hybridisation but it is normal for first-winters to show a variable, though small, amount of black in this area. The white feathering around the base of the bill is tinged brownish and not particularly extensive.

These last two features point to immaturity and I think this bird is a first-winter female (first-year male would be expected to show some upperpart vermiculations and a darkening of the head and breast by now). All other features (overall shape, proportions and especially head shape) are fine for Scaup. So I don’t have any problem with this being a perfectly normal first-year female Scaup … but I’m willing to listen to any other arguments against this to learn in the event that I am wrong 🙂

Since 10th December last year up to two Glaucous Gulls, a juvenile and a second-winter, have been present at Ditchford Gravel Pits, normally frequenting the fishing lake immediately west of Ditchford Lane. They have also been seen on the adjacent ‘viaduct pit’ and on the nearby water ski pit. Dave Warner’s photo of the second-winter, below, illustrates the key ID features: thick, pink bill with sharply demarcated black tip (almost to the very end), sloping forehead with flat crown plus bulky appearance and relatively short wings. The pale iris indicates it is at least a second year as opposed to a pale variant (eastern) first-winter.

Up to fourteen have been recorded in the Midlands to date this winter and these two are the only ones to have been found in Northants so far. Ditchford Gravel Pits is the site to find one locally, having produced approximately 50% of all Northamptonshire’s Glaucous Gulls in the last 10 years, principally as a result of the close proximity of the Sidegate Landfill. Located about 2 km to the north of the pits, this site, visible in part from the road, attracts hundreds – sometimes thousands – of large gulls and, since the demise of tips at Welford and Wootton and the inaccessibility of Weldon, is now the only gull-rich landfill in the County. When not visiting Ditchford to roost and bathe, gulls from the tip are often to be found on adjacent fields and locating a large loafing flock provides the best chance of being able to watch a Glaucous Gull in good light (as opposed to grappling with poor views in fading light at a reservoir roost!).

With last year now behind us, and the 2010 Northamptonshire Bird Report recently published, now is the time to get your 2011 records in. The bird report committee would be pleased to receive any currently unsubmitted records as soon as possible – and in any case by the end of January.

The preferred method of submission is the use of the standard recording sheet (a pre-formatted excel file, see below), which automatically populates the fields for species number and grid reference as you type. It’s very easy to use!

If you are fortunate to discover a species uncommon enough to require the submission of a written description (see the list of requirements in the 2010 report) then please use the description form illustrated below. Both forms are available by email from me northantsbirds@ntlworld.com or from Bob Bullock robertbullock25@hotmail.com and can be completed and returned by email to either of us. So get cracking! 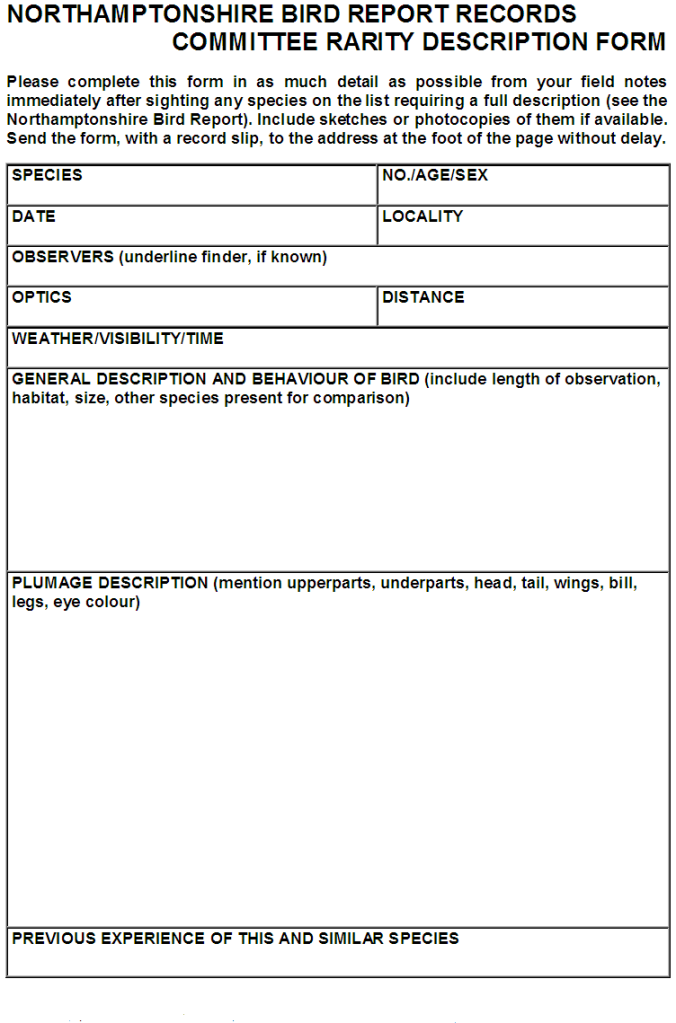