Another predominantly dry period, with continuing westerly winds and temperatures up from below average to ‘normal for the time of year’ at the week’s end. Aside from the arrival of a Temminck’s Stint, there was a little shrinkage in the migrant spectrum over the last seven days.

The Great White Egret remained settled in Pitsford Reservoir’s Scaldwell Bay all week, the same site producing an Osprey, fishing around the dam, on the morning of 22nd. Two more Ospreys were seen, one at Stanford Res on 21st and the other visiting Hollowell Res on 23rd.

Black-tailed Godwits continued to trickle through in small numbers, Pitsford producing four on 19th, three on 20th and one on 25th, while the autumn’s first juvenile was at Stanford Res on 23rd-24th. The only other wader of note was an adult Temminck’s Stint which, seemingly oblivious to observers, obligingly gave great views at Stanwick GP’s Visitor Centre Lake from 21st to 23rd before moving to the main lake there on 24-25th.

The first Black Tern of the autumn arrived at Stanford Res on 24th but the week goes by without a mention of any scarce gulls – the first ‘blank’ week for a long time.

Common Redstarts were reported from five localities, with singles at Priors Hall (Corby) on 20th, Clifford Hill GP on 22nd, Stanford Res on 23rd and 25th, and at Long Buckby and Preston Deanery on 24th. A Whinchat visited Stanford Res on 20th, while single Northern Wheatears were found Harrington AF on 21st, Whiston Locks on 22nd and Borough Hill on 23rd and 25th and migrant Tree Pipits appeared over Stanwick GP on 22nd, at Harrington AF on the same date and at Borough Hill on 25th.

Persistent patch-watching pays premiums – the proof appearing in the form of a nice adult Temminck’s Stint for Steve Fisher at Stanwick this morning. Present throughout the day on the Visitor Centre Lake, it performed well for all comers, allowing many to catch up with what is now a very scarce visitor to Northants.

Lacking the fresh, brightly-fringed mantle, coverts and flight feathers, it’s a rather grey adult with a few dark-centred feathers of breeding plumage. The first Temminck’s Stint to be recorded in Northants occurred as recently as 1946, at Ecton Sewage Farm, where one was also present during winter 1968-1969 – an amazing record in itself.

The vast majority appear in spring, however, with autumn occurrences being extremely unusual almost anywhere in the UK. May is the month in which to find one and Summer Leys LNR is the place to look, producing 48% of the May records over the past thirty years, followed by Stanwick GP, which produced 30%. The last in autumn, prior to this year, was a very approachable juvenile at Hollowell Reservoir, between 22nd September and 1st October 2001.

Conforming to the established pattern, there has already been one during spring this year, on 9th-10th May, at Pitsford Reservoir.

This week was largely dry but the winds varied between north-westerly and south-westerly – hardly conducive to migrants from the continent. Lingering ducks and egrets, a continual stream of godwits and news that Northamptonshire’s 11th Night Heron had been present in the county for well over a week, under the dreaded ‘locality withheld’ caveat, did little to lift local spirits.

Two Garganeys were again in Scaldwell Bay at Pitsford Res on 12th, while last week’s female Common Scoter remained at Daventry CP until 14th and the escaped, metal-ringed female Bufflehead reappeared at Clifford Hill GP on 13th. A singing male Quail was a bonus for ringers at Harrington AF between 01.30 and 02.00 on 16th. Insomnia clearly has its plus points.

The shock revelation, this week, that a juvenile Night Heron had been present and photographed in the vicinity of a garden pond in Blisworth, from late July to at least 7th August, will have come as a blow to many. Attempts made to persuade the landowners to ‘let people in’ had apparently failed. Even the promise of flashing the cash reportedly cut no ice. Clearly, then, if you’re lucky enough to have a pond in your garden you don’t need the extra dosh to get by … Oh well, there’s always Great White Egret to fall back on, with the now seemingly settled Pitsford individual – joined by a second until 13th – offering unrestricted viewing all week. Tongue, cheek and all that.

Raptors were rationed during the period, with a juvenile Marsh Harrier flying west over fields north of Great Brington on 18th, an Osprey visiting Hollowell Res on 13th and 14th and one flying high over Pitsford, without stopping, on 16th.

The week’s highest count of Icelandic Black-tailed Godwits was made at Pitsford Res, where twenty-nine arrived on 12th, six were there from 13th to 15th and three until the week’s end. The only other site visited by this species during the period was Stanford Res, where one remained from 13th to 15th and two more appeared on 18th. Hanging on into the new week was Stanwick GP’s adult Knot, still on the Visitor Centre Pit until 12th.

Common Redstarts were more in evidence this week, with 13th producing four at Fawsley Park, two at Clifford Hill GP and a female, initially ringed as a nestling at Ripon in Yorkshire in June, controlled at Harrington AF. Another female was trapped and ringed at Stanford Res the following day. A very early juvenile Stonechat was found at Clifford Hill GP on 13th and the same date produced nine migrant Tree Pipits at Harrington AF.

This week’s weather was largely a repetition of last week’s, with Atlantic lows sweeping across the country, although continual heavy rain accompanied more northerly winds on 8th-9th. No coincidence, then, that these two days produced some new and scarce arrivals, some of which lingered … while others didn’t.

Duck of the week was the female Common Scoter, which turned up at Daventry CP during the poor weather of 9th and was still present on 11th, while last week’s Great White Egret remained at Pitsford Res until at least 7th.

Just one Whimbrel was seen – at Stanwick GP on 9th – in contrast to last week’s double-figure flocks, while Icelandic Black-tailed Godwits continued to appear in reasonable numbers. On 5th there were three at Stanford Res and singles at Pitsford Res, Hollowell Res and Daventry CP, the following day there were five at Pitsford and one at Stanford, the 7th saw sixteen at Stanford and one at Daventry. Stanford also held four on 8th-9th and one thereafter on 10th-11th and one was at Stanwick GP on 9th.

The latter locality also produced an adult Knot, showing well on the Visitor Centre Pit from 8th to 11th, while another autumn Sanderling made landfall at Hollowell Res during the poor weather on 8th. The autumn’s second Wood Sandpiper was found at Stanford on 9th, remaining there until 11th.

Three Arctic Terns flew east at Stanwick GP during the rain on 8th, as did an adult Little Gull and a first-summer Little Gull was discovered on the Visitor Centre Pit there later the same day. The only Mediterranean Gulls this week were single juveniles at Daventry CP on 8th and Boddington Res on 11th, while Daventry produced an adult and a

A juvenile Black Redstart was seen on houses and garage roofs in East Hunsbury (Northampton) on 9th but could not be relocated the following day while a male Common Redstart was discovered in hedgerow at Twywell Hills and Dales on 11th and a Northern Wheatear visited Pitsford Res on 7th.

The unsettled weather continued throughout the week – the product of a series of Atlantic lows which brought largely south-westerly winds and intermittent rain. The month of August got off to a tremendous start from day one, with the discovery of an adult Baird’s Sandpiper – the third for Northants and the first for more than twenty years – at Stanford Reservoir. After this, everything else seemed incidental …

The two juvenile Garganeys at Pitsford Res remained in Scaldwell Bay until at least 1st, while last week’s Great White Egret appeared settled there between 30th and 2nd and an Osprey visited on 1st. Another Osprey, a male, was seen at Hollowell Res on consecutive evenings of 31st and 1st – at around 18.30 on both occasions – while the first Marsh Harrier of the autumn arrived on cue at Summer Leys LNR on 2nd. Well, it is August …

Two double-figure flocks of Whimbrels, eighteen and nineteen, flew south, non-stop, over Pitsford Res on 29th and 31st respectively and this locality and Stanford Res between them produced all this week’s Icelandic Black-tailed Godwits. Pitsford held seven on 30th and 3rd, one on 1st and six on 2nd, while Stanford produced six on 30th, ten on 2nd, three on 3rd and eleven on 4th. 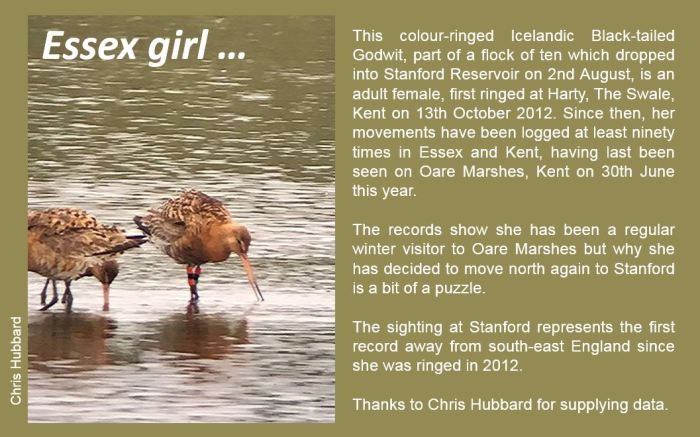 The latter locality also delivered two Turnstones, one on 29th-30th and the other, a flythrough, on 2nd. This week saw another autumn Sanderling – this time at Daventry CP, all day on 2nd but undoubtedly what may yet prove to be the autumn’s rarest visitor, an adult Baird’s Sandpiper, was found at Stanford on the evening of 1st. Frustratingly skittish, it was up and away within a few minutes of its discovery, much to the chagrin of local birders, many of whom were left contemplating the prospect of a twenty-year wait for the next one. Lacking in limelight, Summer Leys rustled up a short-staying Wood Sandpiper on the evening of 30th but this locality’s track record for delivering the goods in autumn is far from enviable.

Back to the reservoirs, then, and Daventry CP produced two juvenile Mediterranean Gulls on 29th and one the next day, while Pitsford held an adult on 1st and a juvenile on 3rd. Master gullers also identified a fourth-summer Caspian Gull at Daventry CP on 1st, with a juvenile and a third-summer there on 2nd and a juvenile and third-summer were also at Stanwick GP on 1st along with thirty-seven Yellow-legged Gulls – a marked return to the form of previous weeks after last week’s poor showing there. Smaller numbers of Yellow-legged Gulls included two at Pitsford Res on 30th and 3rd and three at Daventry CP on 1st with eight there on 2nd.

Passerine migrants were, as expected, low in numbers. Two Common Redstarts were north of Braunston on 30th, a Northern Wheatear visited Pitsford Res on 31st and a Whinchat was there the following day.

Hats off to Chris Hubbard for his sheer persistence in visiting Stanford Reservoir daily – often more than once – as his tenacity pays off handsomely with the discovery of the county’s third Baird’s Sandpiper this evening. This North American wader is very long-winged, with primary tips projecting well beyond the tail, giving the species a distinctively elongated appearance. This evening’s bird is an adult, aged by patchy upperparts with pale fringes worn off to some extent and lacking the uniformly fresh, scaly appearance of juveniles. It also has a fairly heavily streaked breast.

Unfortunately it hung around only just long enough for Chris to obtain the above phonescoped video and a small number of images before it flew off toward Blower’s Lodge Bay and was not relocated, despite several people searching.