With most having long departed for Africa, there are probably fewer than ten Garganeys left in the UK at present. I first found this one at Ravensthorpe Reservoir on 20th September and, though not reported for a couple of weeks in late September/early October, it has a poorly marked face pattern and is readily identifiable as the same individual. It was still present yesterday.

To my eyes, juvenile Garganeys stand out from the crowd of Teal – with which they often loosely associate – even when the face pattern can’t be seen. That combination of dark, oily-rust breast and flanks, contrasting sharp, whitish edges to the tertials and no white line along the outer edge of the under tail coverts is really quite eye-catching. The feeding habit of swimming around with the head partly submerged and rarely up-ending like Teals do is also a useful initial pointer. 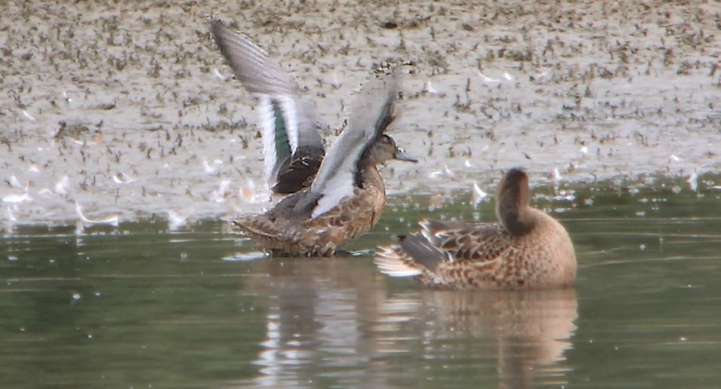 This particular individual is clearly a juvenile based on plumage tone and the solid dark belly (female and eclipse drakes have a whitish belly) but a quick flap of the wings, revealing a greenish speculum bordered by very broad white borders, was enough to sex it as a male.

In the accompanying, rather ropey, video there also appears to be the beginnings of a male breast band – demarcated from the belly – coming through. This does not appear to be mentioned in the literature as appearing quite so early on in the autumn but I guess it has to start sometime.

As it’s been present for a month it will be interesting to see how long this bird stays around. Wintering birds are rare but not unheard of!