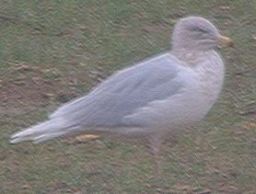 After convincing myself to go against my gut feel and better judgement, it would appear I was wrong in my post-observation photo-based identification assessment of the white-winged 4th winter gull at Rushton last weekend as an Iceland Gull.

Mick Ketley kindly contacted me with a solid argument which supports my initial identification as a Glaucous Gull. Here’s what he says:

As you can imagine, I found your account of great interest and of a very similar situation to what we had at Eye Brook Reservoir (EBR) last month, Saturday 7 January. I thought it strange that you changed your mind when it was put out on recent reports. I feel strongly that you were correct in the first place, that it is a 4th w Glaucous Gull albeit a female, considering its size and bill. Your photos show clearly the following features.
TOP PHOTO: It appears MASSIVE compared to the Common Gull (at its primary tips). It is MUCH LARGER than the adult and juvenile Lesser Black-backed Gulls. Is MUCH LARGER than the 1st w Herring Gull (beside the Common Gull) and ‘argenteus’ Herring Gulls at the top of the photo. It appears to closely approach the size of the large Herring Gull (left of centre at the top of the photo). Taking these pro-Glaucous features and size of bill into consideration it seems to be a female Glaucous Gull.
SECOND PHOTO: Similar comparisons.
THIRD PHOTO: Self-explanatory, HUGE beside the Lesser Black-backed Gull.
BOTTOM PHOTO: On its own. I would expect the primary projection to be slightly longer on an Iceland Gull. The position of the eye is up nearer to the forehead, the ratio of eye diameter to bill length is well within 1:5 to 1:7. These are certainly pro-Glaucous features. Some Glaucous Gulls can show a primary projection, while others, especially bolt upright, have a ‘very blunt rear end’.
To date my personal tally of local (i.e. EBR and around the Corby area) Glaucous Gulls is 36 individuals and 49 individual Iceland Gulls. I found a personal guide to sexing Iceland Gulls as follows, although they have a different structure, I found BODY MASS to be helpful, in comparison with large male Common Gull, = female Iceland. And with Lesser Black-backed Gull = male Iceland.
This is not the first time nor the last this situation arises re. white-winged gulls, I’ve known a few. On Saturday 7 January, last month, I spent a lot of time at Rushton a.m. as there were three large concentrations of gulls, nothing special. Then I went to RW and arrived at EBR at 3.00 p.m. just as Andy Mackay, Colin Towe and Chris Lythall located a white-winged gull on the water at the inflow. On its own just like your bird, we all agreed to Iceland Gull, small, extremely pale grey mantle and upper wings (pro-Iceland), low profile and long attenuated rear end, even the ‘small’ bill size. However I did remark that the eye was up nearer the forehead. Then other gulls swam alongside it and alarm bells rang. Even ‘argenteus’ were dwarfed by it and it was matching larger Herring Gulls. If you go onto LROS latest sightings, scroll to the 2 photos dated 7 January, it looks like an Iceland Gull (adult), touch on the photos for the bigger picture, no pun intended, and like yours, seems to be a female Glaucous Gull, compared to other gulls with it. The shade of grey appears darker in the photos, it was extremely pale.

I cannot disagree with Mick. Further research throws up the not infrequent occurrence of Glaucous Gulls with ‘long wings’ and, despite the apparently small bill, this gull retains that mean, Glaucous look …