With more unsettled weather afoot, chilly northerlies swung quickly to south-westerlies, bringing rain, bluster and birds. In the last week before taking the unwelcome plunge into late afternoon darkness for the next few months, leaf-fall accelerated and migration continued apace – especially where passerines were concerned – with the reservoirs at Pitsford and Stanford again delivering the best in class.

Looking set for the long haul, the adult Whooper Swan remained all week at Thrapston GP, while four adults flew north over Pitsford Res on 21st and another adult was found at Summer Leys LNR on 25th. The female Ruddy Shelduck was still at Ravensthorpe Res on 19th and the continued presence of one Red-crested Pochard at Clifford Hill GP was eclipsed by three at Pitsford on 25th. More Greater Scaup arrived this week and included three at Daventry CP on 22nd, one of which – a juvenile – remained until 25th, while the juvenile at Pitsford on 13th reappeared there on 24th.

The number of Cattle Egrets present at Stanwick varied by the day and included a maximum of six on 21st, while Great Egrets were reported from the usual localities, including reservoirs at Hollowell, Pitsford and Stanford and gravel pits at Stanwick, Summer Leys and Thrapston, with no more than two at any locality.

Waders were understandably thin on the ground. With the recognised passage period now over and water levels at local reservoirs unseasonally high after the past few weeks’ persistent rain, it is, after all, hardly surprising. So a Ruff at Stanwick on 23rd and a Jack Snipe at Ditchford GP on 22nd, were all local observers were able to squeeze out of this week’s birding.

Just one Mediterranean Gull – a first-winter – found its way to the county this week, when a first-winter appeared in the roost at Boddington Res on 22nd, this date also producing a respectable site total of ten Yellow-legged Gulls at the same locality. Singles of the latter were also seen at Hollowell, Pitsford and Thrapston. 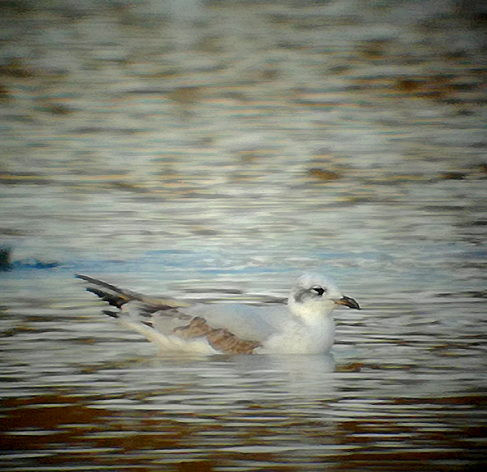 The first Short-eared Owl of the autumn/winter period was found on Borough Hill on 19th, quickly followed the next day by another at Harrington AF, where a Merlin was seen also on 19th, the same individual possibly accounting for one reported in the nearby Brampton Valley during the week.

Following small numbers Waxwings turning up in Orkney and Shetland as early as 2nd October and with many localities on the east coast and across the Midlands (and even Scilly) pulling in the odd bird, three making a five-minute stopover at Stanford on 25th is perhaps not as surprising as it may at first seem. Are we in for a Waxwing Winter? When and where will the next ones be in the county and who will be the claimant? The bets are on …

Much rarer locally than those jingling, colourful and charismatic berry-gobblers and altogether much less flamboyant, Woodlark remains highly prized in Northamptonshire. On 23rd, two circled Pitsford’s Scaldwell Bay before flying north. With just three previous records this century (2001, 2014, 2016) and ten in the last fifty years, it’s a puzzle as to why we don’t see more. The above two, along with earlier reports of singles at Woodford on 1st January and Pitsford on 15th April, will give us our best-ever year for this species, assuming all records are formally submitted and subsequently accepted by the local records committee. 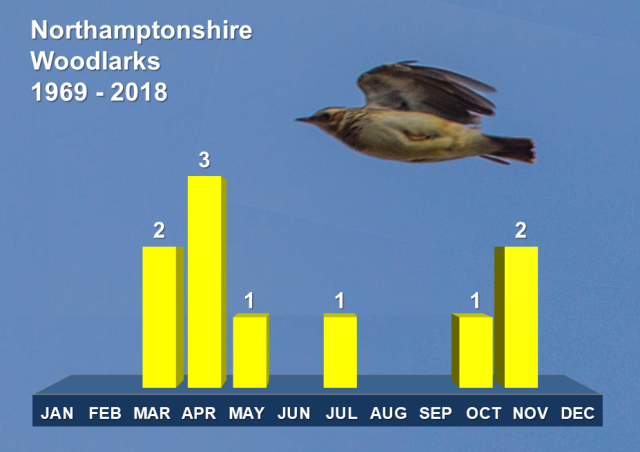 There were no more Yellow-broweds this week but continuing the rare warblers theme was an ‘eastern’ Lesser Whitethroat at Stanwick on 21st. With the east coast – particularly East Yorkshire – having produced a number of candidates for Siberian blythi and a possible Turkestan halimodendri in the past couple of weeks, its occurrence comes as no real surprise. Siberian Lesser Whitethroat has already occurred in Northants in recent years – the first, a wintering bird, in 2014 (1, 2, 3) and the second, trapped and ringed in 2015. Stanford scored another ‘back of the net’ with a Firecrest trapped and ringed on 25th. More good stuff from the Stanford Ringing Group before the autumn’s out, I’ll wager! Stonechats continued to be seen at Borough Hill, Clifford Hill, Pitsford Res, in the Brampton Valley and at Harrington AF, where vizmig fly-overs included the hunky Anthus duo of Rock Pipit and Water Pipit on 19th and 20th respectively. With five Common Crossbills flying over Stanwick on 20th, this week the passerines have it, the passerines have it!