A mild, southerly airstream continued into the first half of the period before the wind swung momentarily northerly toward the week’s end. The chance discovery of a fine male Parrot Crossbill duly elicited a local northerly movement by those hoping to catch a glimpse.

With last week’s presumed ‘C list’ Barnacle Goose flock still present at Clifford Hill GP, having risen to forty-one on 15th, some light was at last shed on its origin. 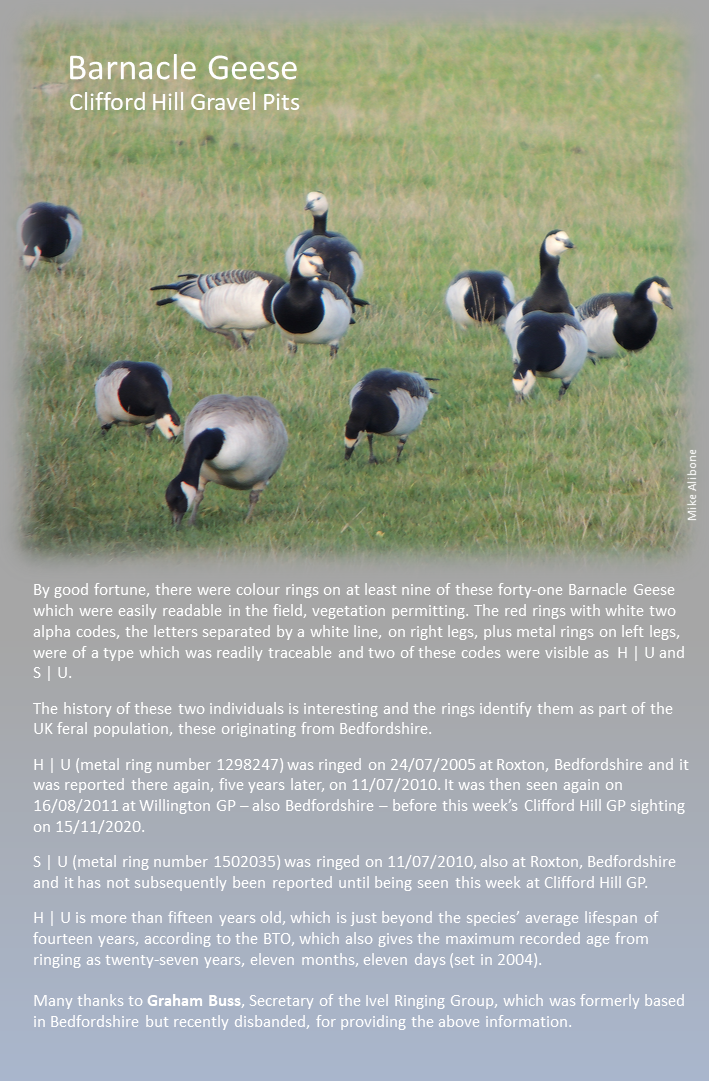 One of two Barnacle Geese found at Stanford Res last week was also metal-ringed on its left leg but no colour rings were in evidence. Both birds remained until 16th. Meanwhile, the goose theme continued at Hollowell Res, where last week’s six Pink-footed Geese were back up again to seven on 19th. The only other waterfowl of note were Red-crested Pochards which, this week, were confined only to Pitsford Res, where the highest count was eight on 19th.

Back at Hollowell, the juvenile Great Northern Diver was still present on 19th, after becoming evasive in the early part of the week.

Cattle Egrets remained, as usual, in the Stanwick/Irthlingborough area, where the highest count was six on 16th and 18th. Upsizing, Great Egrets were again much in evidence, widespread across at least ten localities in the county, from Blatherwycke Lake to Stanford in the north and along the Nene Valley from Thrapston GP to Billing GP, Thrapston logging the week’s highest site count of five on 15th.

A superb total of fourteen Jack Snipes at Daventry CP on 17th was nearly triple last week’s count from there and is surely a record count for the site.

Winter gulls this week included two adult Mediterranean Gulls – one flying south-west over Stanwick GP on 19th and the other at Boddington Res the following day. The third-winter Caspian Gull was again at Hollowell on 14th and 17th, while a first-winter visited Daventry CP on the latter date. Single adult Yellow-legged Gulls were at Pitsford on 14th-15th, Hollowell and Daventry on 17th and at Thrapston on 18th.

A Short-eared Owl was reported from the Irthlingborough area on 16th, while this week’s Merlin was an immature male at Harrington AF on 18th.

As a result of their often nebulous nature, ‘possibles’ rarely feature in this report but for the sake of completeness and on the off-chance that a Northamptonshire first – a ‘mega’ at that – could potentially be passing us by, it would seem prudent to include the possible Dusky Thrush reported on 20th. Said to have been with Fieldfares and Redwings, close to the north-west corner of Kingthorn Wood, between Greens Norton and Bradden, late morning, the news was released during the afternoon. Those (three) who made it to the site in gloomy conditions met with disappointment as a highly animated flock of some four hundred or so winter thrushes kept their distance and eventually split up and dispersed. But in case anyone fancies chancing his or her arm, it’s a very nice area, with a pocket park …

Back down to earth somewhat, Stonechats were recorded from Boddington, Hollowell, Pitsford, Stanford and Thrapston. Once again, four at Hollowell on 17th was the highest total at any locality.

But tangible bird of the week, without doubt, was the smart male Parrot Crossbill photographed at Wakerley Great Wood on 15th. The first of these vagrant cone-crunchers for almost 30 years and not the easiest to pin down – and there may have been more than just the one.

A veritable supporting cast, Crossbills were prevalent at the same site throughout, with more than forty estimated to be present. Hollowell, too, is fast proving itself to be a reliable site for this species, with numbers there growing throughout the week and peaking in excess of twenty on 20th, while at least five flew north-west over Harrington AF on the same date.