More Atlantic weather systems produced largely overcast skies and frequent showers on the back of a westerly airstream, while traditional ‘summer’ weather has yet to emerge. Finding anything new proved hard graft for most, although a certain high flying raptor constituted manna from heaven for one observer, while others made do with a steady trickle of migrant waders serving as a reminder that birds were on the move.

At Pitsford Res a Cackling Goose, showing characteristics of the race taverneri, was discovered among the Canadas there on 30th, although its chances of being wild are, of course, pretty much zero – nevertheless it’s an interesting bird to see.

The drake Goldeneye was also still there on 25th and so was the Stanford Res bird on 26th – the latter thought to be flightless and so not the same individual as the Pitsford bird as surmised in last week’s report.

This week’s ‘bird of the week’ appeared in the north-east of the county on 25th. While James Underwood was photographing Red Kites and Common Buzzards over his garden, in Corby Old Village, a Honey Buzzard came into view, drifting high west. The moment was captured and the species swiftly added to the garden list, hot on the heels of the White Stork which circled over there less than three weeks previously, on 6th June! 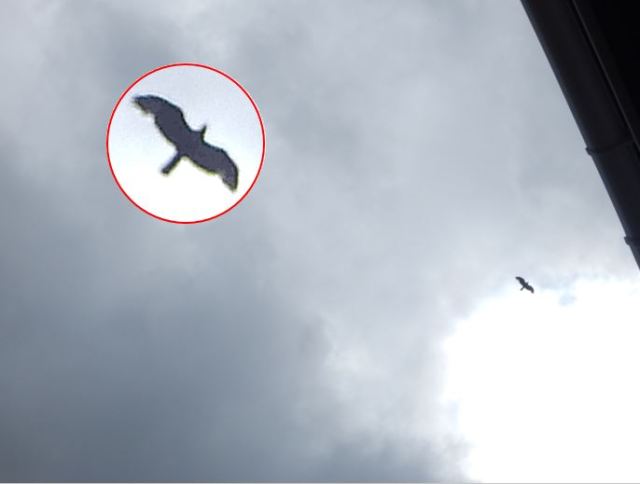 The only other raptors of note were an Osprey at Welford Res briefly on 28th and single Peregrines at Northampton on 25th and at Thrapston GP the following day.

Some recent news on last week’s colour-ringed Black-tailed Godwit at Summer Leys concerns its being seen four days later at Creek Common, North Hayling, Langstone Harbour, Havant, Hampshire on 30th. Who says birds aren’t site-faithful! On the wader front, four Little Ringed Plovers were at Stanwick GP on 27th and two Ringed Plovers were there the next day, while a Curlew flew over Stanford Res on 25th and one visited Summer Leys LNR briefly on 29th.  More Common Sandpipers appeared this week, with singles at Stanford Res on 26th and 29th, one at Stanwick GP on 28th plus two there on 30th and three at Welford Res on 28th, a Green Sandpiper was at Stanwick GP on 27th with a Redshank there on the same date.

Stanwick also produced the week’s only Yellow-legged Gulls, which included seven on 27th, three on 30th and eight on 1st, along with a second-summer Caspian Gull on the latter date. Beyond that, a Turtle Dove still at Harrington AF on 27th and one at Stanwick GP on 1st was all the week could muster.